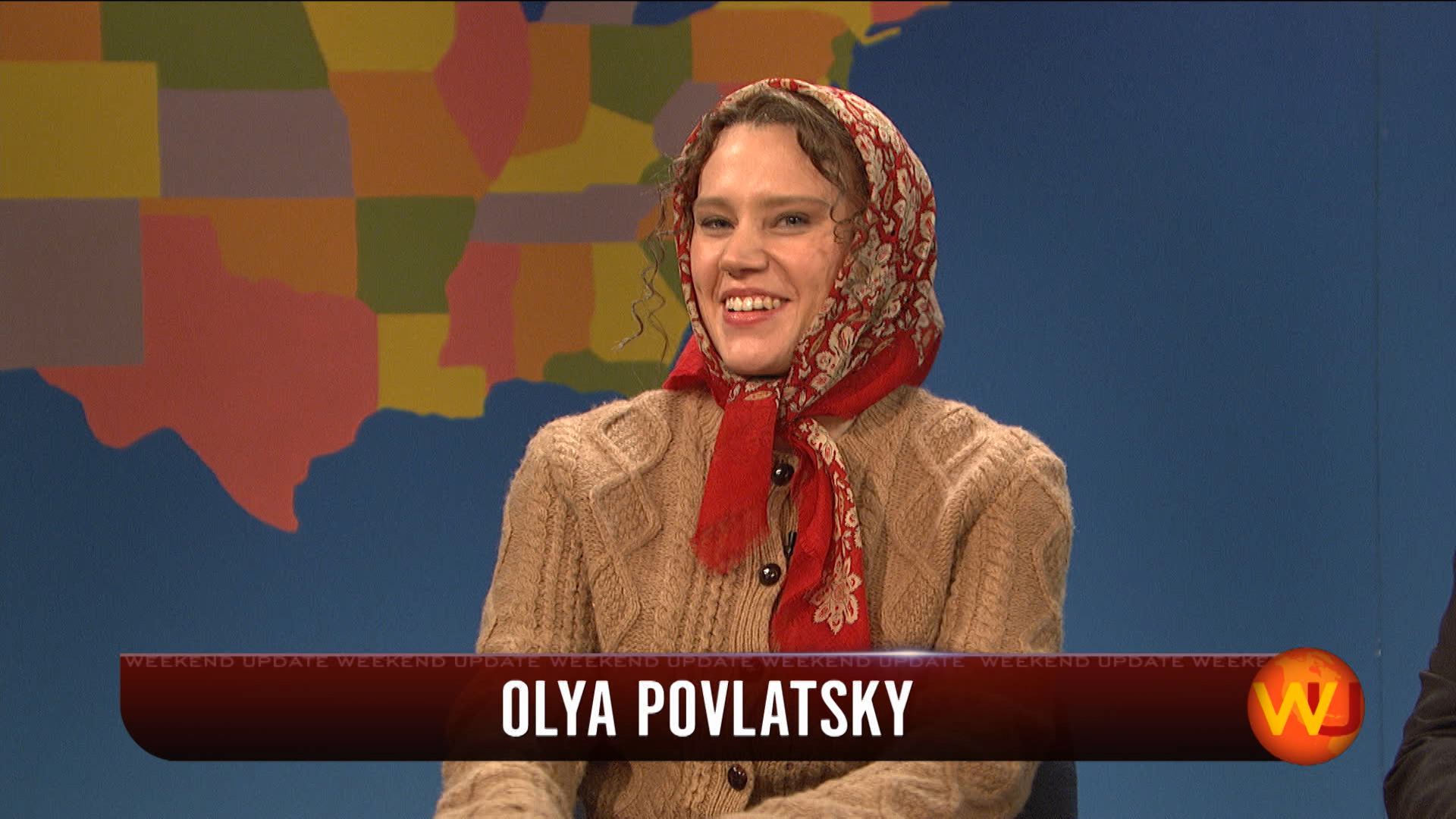 A micro lesson for SNL on Russian names: A woman’s last name virtually always ends with an a, or aya making our dear Olya above Olya Povlatskaya. (Source: Yahoo.com)

This SNL skit makes me laugh. And right it should. Kate McKinnon’s humor in the visage of “Olya Pavlotsky” takes full advantage of the west’s cultural stereotypes of Russian life in a Siberian village. Let’s see, we’ve got extreme cold, suffering eternal, ravenous wolves, ravenous bears, a headscarf over a dumpy sweater, line waiting for provision, and marauding packs of dogs. SNL’s Siberia is a regular barren wasteland trapped in the 1930’s. Kate’s commentary on Russian culture calls forth mirth dependent upon our perception of what Siberia is. And it is based on some historical truth, it is a mixture of what Siberia was like in the first three decades of the twentieth century, when exiles and prisoners labored in camps, when the hooves of red and white forces thundered across the frozen Asian taiga in Civil War, when State engineered famine struck in the twenties, and after the Great Patriotic War (WWII) through the fall of Communism, when it was normal for people to line up for hours grasping ration cards to trade for life-necessities such as soap, sugar, baloney sausage, and underwear, yes, underwear to name a few.

Supporting the luxury of support will require those ration cards ladies! (Source: http://oadam.livejournal.com/310827.html)

If anyone could appreciate making light of tragedy and suffering, it is Russians. That is an art the people mastered. Humor lightened the load, and kept hope alive. How strange it is to laugh at deeply dark and violent things, and yet cathartic, enervating the body, launching us toward restoration.

While Kate’s portrayal of a young Siberian woman is absurd and whimsical, if we settle for that Siberia, we miss out on the vast richness that is Siberia today. Siberia has it all: arts, culture, unexplainable beauty; bursting with berries and fruits, alive with the hustle of sprawling urban cities, and her sunburned summer days lengthen long into the evening.

Take Chelyabinsk for example. The screaming fireball of a meteor (most filmed meteor in history) that streaked her morning sky, rumbled over a population well north of a million. You can see cars, trams, and buses locomoting the streets of the city, sorry, no wolves, no bears here. Flowering trees, flowerpots and tech-savvy, smart phone-toting teens in the flower of youth spring up from parks, benches and sidewalks. Chelyabinsk is home to opera, ballet, an art museum and twelve universities. The time-lapse video below is full of remarkable city vistas you might encounter in any of the large cities that call Siberia, home.

So laugh with Olya! And remember Siberia, she is enchanting.